Understanding the different types of sports bets available to you is absolutely key in unlocking the most value from your wagers. It is essential that you understand each option you have at your disposal because each type of bet will be suited to different scenarios. Sports betting is so much more than betting on the winner or loser of a match. 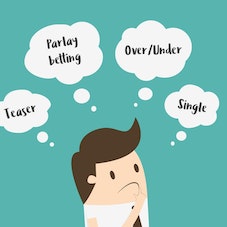 A moneyline bet will always be offered by a sportsbook in this format:

So, let’s make this easier with an example from the NHL. In this example, let’s say the New England Patriots are playing the Buffalo Bills. The Patriots are the favorites for the game so the odds could look like this:

If you backed the New England Patriots your winnings = ($10 / 110) x 100. This means that you would get $9.09 in winnings. Not an amazing return, but that is what happens when you back strong favorites. This would be a good opportunity to look at a point spread which we will come to later.

What are the different forms of sports bets?

The most common forms of sports bets in the US are moneyline, point spreads, parlays, teasers and over/unders. You can find out more about these on this page.

What is a prop bet?

A prop bet stands for a proposition bet. This type of bet usually predicts an occurrence or a non-occurrence from happening. So it could be that a certain team hits a home run. It can stretch to anything, so you can lay a prop bet on there being a streaker in a game for example.

What is the most common type of sports bet in the US?

The moneyline bet, where you back the favorite or underdog to win a match is the most popular form of sports betting in the US in 2019.

What is a multiple bet?

What is the best type of sports bet?

In the example we used above, you can see that sometimes backing a strong favorite doesn’t bring you that much value. If a team is expected to win, then your sportsbook is not going to offer you high odds, as they would lose money. To counteract this, sportsbooks have introduced something called spread betting, which gives both teams a points handicap.

The points spread reduces the differences between the favourites and the underdogs by giving the underdogs a head start. Points Spread betting is particularly popular in the NBA, but for continuity’s sake let us continue with the same example from the NFL.

New England Patriots are playing the Buffalo Bills and, as before, the Patriots are strong favorites. This is indicated, just like with the moneyline bet, with a minus symbol before the Patriots odds. However, this time around the same odds will be offered for both teams but there will be an additional points handicap introduced.

This means that the game effectively starts with the New England Patriots trailing by 8 points. With a 8 point handicap suddenly there is more risk attached to backing the Patriots, so the sportsbook has lengthened the odds. In fact, so much so, that now New England Patriots have the better value odds

The nature of this type of sports bet, has ones advantage over the moneyline bet in that it eradicates the option of a draw. In a moneyline bet, you will lose if both teams draw, but with a points spread the adjusted points spread means that this is considered a ‘push’ and you will get your original wager returned. So, if you were to back the New England Celtics with $10 at a -8 points spread, you could expect the following three outcomes:

Parlay betting has increased rapidly in popularity since online sports betting was legalised in the US. This is in part due to the many promotions pushed out by sportsbooks across the country. Parlay betting can offer huge returns, which is of course, attractive to betting customers everywhere but it also requires a lot of risk.

So what is a parlay? A parlay is a smorgåsbord of bets rolled into one nice juicy high risk, high returns sport bet. With a parlay you add single bets together, the sportsbook then adjusts the odds accordingly. Since one lost bet will mean you lose all the other bets, the increased risk means that the odds offered by the sportsbook should be higher than placing a series of single bets.

At bettingscanner.com we err on the side of caution, but we can see the fun in this type of bet. These are some of the advantages:

However, like with anything in sports betting, it is how far you take something which defines whether it is a good idea or not. The key is the amount of bets that you add to a parlay.

For example, backing two favorites in two single bets might not offer very attractive odds, so putting them into a parlay might be a good idea, as it will add value to relatively safe bets. Whereas adding nine different bets across different leagues is veering toward a lottery than skilled betting.

Let’s break this down into an example where we compare three single bets vs a parlay.

Single bets vs a parlay

You want to place the following three sports bets with your sportbook:

If you place a $50 wager on each of these bets you would be looking at the following winnings:

Now. let’s look at what your sportsbook might offer if you rolled this into a parlay bet:

The Total of this parlay with the same $50 wager would be 100 in winnings. So, you have made around $65 more in profit.

In this example, you can see that you can earn considerably more from a parlay than single bets. But the price you are paying is the increased risk. If two out of your three single bets came through, you could still make money. However, in this scenario, with a parlay, you will lose your whole bet.

This form of betting is as sexy as it sounds. It is effectively a parlay bet and a points spread bet rolled into one. With a teaser bet, your sportsbook will offer you one points spread for more than one spread bet.

Let’s say you wanted to bet on the three same matches as above:

A points spread has been offered for each of these matches. Your sportsbook is offering you a teaser of +2. This means that if you accept the teaser you will get the following points spread.

Of course, the sportsbook will adjust the odds according to the shift in the handicap. This can get a little complicated, especially when you have a lot of bets in a teaser, so we recommend you take your time here.

Teaser bets are not offered by every sportsbook in the US at the moment, but just over 50% have some form of teaser betting available. It is also important to remember that not all points spreads will be allowed by your sportsbook to be included in a teaser.

This type of betting requires you to throw some of your natural sporting instincts out of the window. Firstly, this type of bet does not care who wins or loses necessarily but rather how many points, goals, runs etc are scored. Secondly, sportsbooks will often add decimals to the points.

This means that the bookies expect less than 50 points to be scored. If you were to put $50 on over 50.5 points you could be looking at $50 in winnings.

In the example above you can see that the sportsbook has added a 0.5 to the predetermined number of goals. Of course, there won’t be 50.5 points scored in a game so this simply eradicates the chance of it being a draw.

Over/under bets can be useful when you don’t necessarily know who will win but your research indicates that there will be a lot of or very few goals. Imagine two teams are riddled with defensive injuries but are evenly matched in their league. This could be a good time to place an over bet.

What is sports betting?

How do odds work?

What are betting bonuses?