Here you can find the perfect sportsbook for your NHL betting

FAQS about betting on the NHL

Gambling on Ice Hockey can win you some big money, but you need to know your stuff before you place that first bet.

Yes. Betting in the USA has recently been legalized at the national level.

Now, it is up to each state to decide whether you can bet within their borders or not.

Currently, you can place NHL bets in the following states:

🤝 What sportsbooks partner with the NHL?

Three sportsbooks are currently partnered with the NHL:

💲What NHL teams partner with sportsbooks?

🤔 What is the most popular type of NHL bets?

Moneyline is the most popular form of betting when it comes to ice hockey.

This simply requires you to back an outright winner. This does not mean that it is the best type of betting for ice hockey.

There are a number of other betting types you can read about above that are likely to offer better value odds.

💯 What is the best sportsbook for the NHL betting?

When it comes to the NHL there are a large number of high quality sportsbooks to chose from. First, you will need to check which sportsbooks are available in your state.

We have selected three sportsbooks which we have ranked as our top three:

If you are looking to place an NHL spread bet then we can recommend PointsBet.

🏒 Which sportsbook has the best NHL odds?

There is no perfect answer to this. Different sportsbooks can offer the best value odds depending on the NHL match or type of bet you are looking to place.

There are three standout sportsbooks:

If you are looking to place an NHL spread bet then we can recommend PointsBet.

At bettingscanner.com we have an international team, including people from countries where ice hockey is a major national sport. For all of us who are into ice hockey, the NHL remains the league which we all bet on.

The NHL is the league with all the best players which offers us thirty teams from the US and Canada with an 82-game regular season; what more could you want?

Well, there is more. Once the regular season (October-April) is over, the teams compete in a round-robin for a place in the Stanley Cup playoffs. The Stanley Cup final remains one of the biggest events in the sports betting industry.

So, what sportsbook is the best NHL sportsbook? Well, the first thing you need to think about is what state are you in... 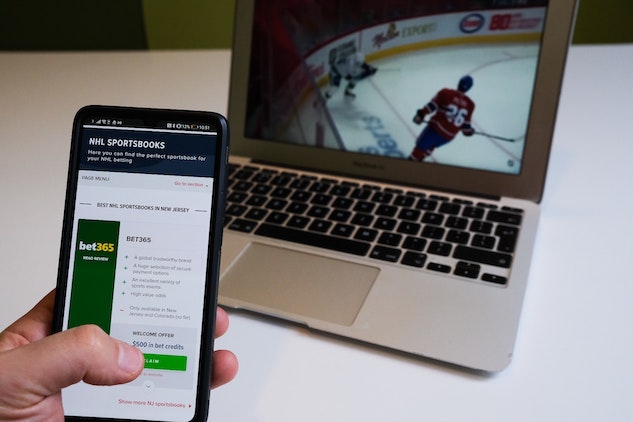 What makes a great NHL sportsbook

When it comes to the NHL, some sportsbooks have decided to go all-in, whereas others have focused more on the NFL, NBA or MLB. PlayMGM are the sportsbook that we can see have really focused completely on the NHL.

But what is it that makes a sportsbook really the perfect fit forr NHL betting. Well here are the factors we look for:

If you are based in New Jersey and you like to bet on the NHL then you are in luck. The state is leading the way when it comes to online sports betting in the US.

The sportsbooks which have launched in the state are also acutely aware that the NHL is huge in New Jersey.

The Garden State is home to the New Jersey Devils and Ice Hockey is simply embedded in its DNA.

The British sportsbook has created a world class product for its New Jersey customers. It has also placed an enormous amount of emphasis on its selection of NHL bets.

Pennsylvania is the US state with the second largest amount of licensed sportsbooks. They all offer a good selection of NHL bets due to the popularity of ice hockey in the Keystone State. There are two NHL teams based in Pennsylvania the Pittsburgh Penguins and the Philadelphia Flyers.

With this in mind it is hard to pick one standout sportsbook in Pennsylvania, but if push came to shove we would have to select FanDuel PA as our number one. The fantasy sports provider turned online sportsbook simply has the full package: excellent odds, great selection of NHL bets, a user-friendly product and generous welcome offer.

Best NHL Sportsbook in IN

Indiana is currently the state with the third most sportsbooks in the country and even if ice hockey is not the most popular sports in the state, they all offer a decent selection of NHL bets.

At BettingScanner we have been impressed by PointsBet's product in Indiana. The Aussie sportsbook became known for its spread bets, but since its move to the US, it has proven that it is a great all-round sportsbook. It doesn't hurt that spread betting lends itself nicely to the ice hockey!

Best NHL Sportsbook in IN: PointsBet

The Aussie sportsbook has a great selection of NHL bets and an excellent product optimized for Indiana. It also offers the best spread betting in the market.

Moneylines are the most common form of bet in almost any sport. A moneyline is simply backing who you think will win the game.

An example of an NHL moneyline

The New York Rangers are playing the Washington Capitals.

The Washington Capitals are the favourites for this game and the New York Rangers are considered the underdogs.

The Washington Capitals are in form and you agree with your sportsbook that they should win, so you decide to put down $50 on them.

There are two potential outcomes for your bet: 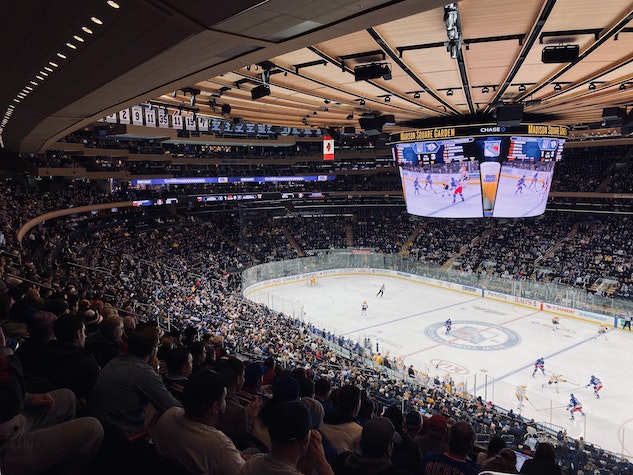 Moneyline betting is a great way to start if you are new to the world of online sports betting. It is the most common form of betting and also the most available. However, it may not always bring the most value.

We have listed some advantages and disadvantages with moneyline betting to give you an idea of when to use it.

How to calculate NHL moneyline bets

Let’s say you put down a $50 wager on the underdog, the New York Rangers, at moneyline odds of +150

To calculate this you can use the following formula:

Another way of understanding ice hockey money lines is to learn how to calculate the potential winnings.

To calculate this you can use the following formula:

Pucklines are a popular type of bet which only really exists in ice hockey. This form of betting usually places both teams with a 1.5 plus or minus handicap. Bettors using the puck line can lay 1.5 goals with the favourite or take 1.5 goals with the underdog.

Pucklines, like runlines in baseball, requires you to reverse an in-built logic in your head.

With the addition of the 1.5 goals, the favourite can become the underdog and vice versa, as it now means the original favourite must win by 2 or more goals. Your online sportsbook will always use a .5 decimal to prevent pushes.

An example of an NHL puckline

This means that the Washington Capitals are favourites, so a puck line bet could look like this

Say then, you still back the original favourites, The Washington Capitals (now the underdogs) with a $10 wager. This could result in two possible outcomes:

This type of betting is very popular with NHL fans. It simply requires you to predict whether there will be more goals in a game than a number predetermined by your sportsbook.

With NHL total betting, sportsbooks usually place that number between 5 and 6.5 but it can vary. Although betting totals is a popular betting form in many sports, sportsbooks treat totals betting in ice hockey slightly differently. Football and basketball are much higher scoring than ice hockey so sportsbooks will be more likely to adjust the odds than changing the over/under total.

Totals can be useful in certain situations, perhaps when the outcome of the game is hard to call, due to both teams either having very strong, or very weak defences.

This might make it hard to call the game but easier to call the number of goals in a game.

An example of an NHL total

The Boston Bruins are playing the Maple Leafs. You have studied their head to head record and their current goalscoring stats and decided that this will be a high scoring game. The totals offered are:

There are two possible outcomes to your bet:

When the same over/under odds are offered it is known as a ‘5.5-flat’.

This is a bet that is completely unique to ice hockey and is simply great fun. It is effectively an over/under or totals bet for the entire game day.

With a Grand Salami, your online sportsbook will offer total goals for all the games being played in a day.

An example of an NHL Grand Salami

There are 10 matches in an NHL game day. The bookies are offering the following:

There are two potential outcomes:

The pinnacle of the ice hockey calendar is undoubtedly the Stanley Cup playoffs and final.

The elimination tournament which consists of four rounds of best-of-seven series is also the most popular time of year for ice hockey bettors all around the world.

It’s also the time of year that US sportsbooks will focus primarily on the sport of ice hockey, especially around the final date, where amateur bettors will join the more experienced bettors for a wager. This means that there will be a flood of promotions and offers in the build-up to the final, as sportsbooks try and attract ice hockey fans who are flirting with the idea of sports betting.

The majority of these promos will focus on new customers, enticing them with enhanced odds, and hoping they’ll be bitten by the betting bug once they are all signed up. These promotions and bonuses can be both a blessing and a curse. The enhanced odds can seem really attractive and sometimes they are, but it is important to always read the small print and know what you are signing up for.

Betting on the NHL 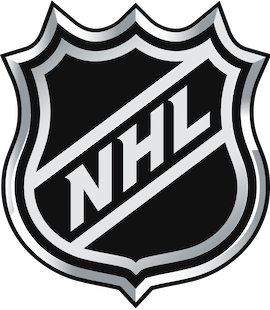 Betting on the NHL has been legal since 2018.

New Jersey Devils → The NHL team based in NJ have certainly felt the love, signing a total of four sponsorship deals since 2018.

Vegas Golden Knights → The Knights partnered with William Hill early doors. The British sportsbook has been active in Vegas since 2018.

Washington Wizards → The British sportsbook signed a deal with Monumental Sports & Entertainment in 2019. The Wizards were included as part of the deal.

New York Rangers → The two big brands joined forces in January 2021. As part of the deal DraftKings can promote both their Daily Fantasy Sports platform as well as their online sportsbook product which New Yorkers can bet with if they travel to New Jersey.

Pittsburgh Penguins → The sportsbook which began its life in Pennsylvania opted to support a local team.

Nashville Predators → The Tennessee based team were signed by DraftKings almost as soon as the state of Tennessee legalized online sports betting.

Popular types of bets on the NHL