The Texan Senate will convene in 2021 to discuss the possibility of online sports betting.

Sport betting is not currently legal in Texas. The second largest state in terms of area and population is home to only three legal tribal casinos. To legally bet on sports Texans face a road trip to New Mexico or Arkansas where there a limited number of physical sportsbooks and casinos. The one exception is horse racing and parimutuels which are legal in the state of Texas.

Recently a legislation was filed that would legalize online sports betting in the state of referendum. However, this leglislation would beed to pass the house, senate and finally a vote in a referendum.

Betting in TX - what you can and can't do

The Lone Star State is showing early signs that it could open its borders to online sports betting. Here are your most common questions.

No, sports betting is not currently legal in Texas. Legislation will be considered in 2020 that would allow online sports betting in the state. However, the bill H 1275 would need to pass the house, senate and a referendum.

🤔 Are there any sportsbooks in Texas?

⌛ When will online sports betting be legal in Texas?

In 2018 and 2019 it looked highly unlikely that sports betting would be allowed in Texas. However, in early 2020 there have been signs that the state could be softening on the subject. A bill is now being considered that would allow legal online sports betting, however it needs to pass a referendum before would be implemented.

❓ How can I bet on sports in Texas?

At the moment you cannot bet on sports in Texas. Unless you want to bet on horse racing which is legal, your best bet (excuse the pun) is to visit a legal sportsbook in a neighbouring state such as Arkansas.

The Lone Star State is still some way from a legal online sports betting market. However, it has begun the long journey.

A bill has been introduced which would allow online sports betting in the state. This in turn would provide a boost for the state budget through an injection of tax revenue.

Texas opening its doors to online sportsbooks would be a monumental event in the sports betting world. The state has a population of 29 million and considering how much interest there has been in states such as New Jersey, Pennsylvania and Indiana, it is not hard to imagine the amount of sportsbooks that would be lining up at the border should the state legalize sports betting.

The bill still needs to pass the house and senate, and if it manages this, then it would go to a vote. This does make it sound more unlikely that it might actually turn out to be however. The incentive is there for a traditionally conservative state when it comes to sports betting to change its stance. First, bordering states such as New Mexico and Arkansas have relaxed their stance on online sports betting. Then there is the fact that legalizing sports betting would give the state budget a significant bump.

When it comes to public opinion we expect to see a significant campaign from DraftKings and Fanduel who already have a significant number of fantasy sports customers in the state.

It is possible that online sports betting could be legalized by the end of 2021.

Sports Betting in Texas: The situation in short

The Supreme Court deems the PASPA act unconstitutional in May 2018. 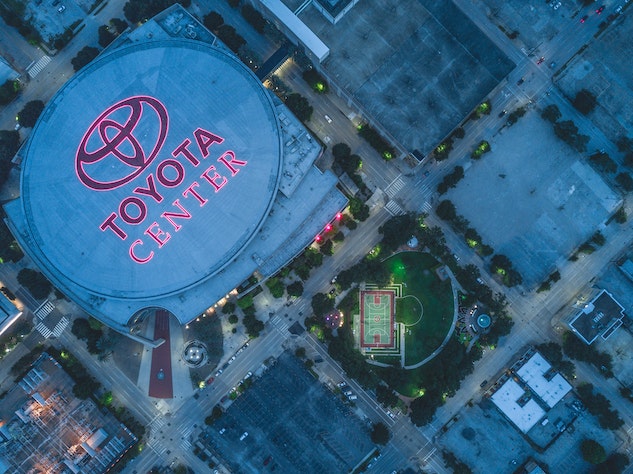 The Toyota Center, home of the Houston Rockets

Texans are truly spoilt when it comes to sports teams. With 10 major league teams and a population of almost 30 million the state is, after possibly only California, the most attractive state for sportsbooks to set up shop.

Dallas Mavericks: Created in 1980 the Mavericks have only one NBA title to their name from 2011.

Houston Rockets: Founded in 1967 and previously the San Diego Rockets, the Houston-based team have two NBA titles to its name.

San Antonio Spurs: Founded in 1976 the Spurs have picked up four NBA titles and are the fifth most successful basketball team in NBA history.

Dallas Cowboys: The Cowboys are best known for their team in 90s with players like Emmitt Smith, Michael Irvin and Troy Aikman. Overall the Cowboys have picked up 5 Super Bowl titles.

Houston Texans: The Texans were founded twenty years ago, and struggled to make an impact in their first decade in the NFL. However, they won their first division championship and playoff birth in 2011. They are now showing potential to be a winning franchise with one of the best players in the league J.J. Watt.

Texas Rangers: The Rangers finally made the World Series in 2010 but have yet to clinch a title

Houston Astros: The Astros, established in 2020, have one World Series to their name from 2017.

Dallas Stars: The Stars have several Division Championships, two Conference Championships and a Stanley Cup to their name.

FC Dallas: Founded in 1996, the Toros have enjoyed moderate success in the MLS, reaching the MLS Cup Final on one occasion in 2010.