It looked like we were going to get online sports betting in the Buckeye State already in 2019. However a protracted legislative process has left the state in limbo which means that we will have to wait until at least the end of 2021 before we see any Ohioan sportsbooks.

Things looked so promising. In 2019, as the beautiful Ohioan spring was in full swing, the state introduced bills for consideration. Both would result in a full legalization of sports betting in the Buckeye State.

The excitement by sports fans all over Ohio was palpable; soon there would be legal sportsbooks in the state with almost 12 million inhabitants and seven professional sports teams.

What followed can only be described as one of the industry's biggest anti-climaxes. After a period of legislative wrangling and discussions over integrity fees, the period for approving the bills passed.

Betting in OH - what you can and can't do

🤔 Are there any sportsbooks in Ohio?

No. Sports betting is not currently legal in the state of Ohio. The state is currently considering two bills which would legalize sports betting.

⌛ When will sports betting be legal in Ohio?

We expect that by the end of 2020 sports betting will be made legal in the state of Ohio. There are two bills currently being considered that would legalize sports betting.

❓ How can I bet on sports in Ohio?

Sports betting is not currently legal in the state of Ohio. You can however sign up for a sportsbook in neighboring states such as Pennsylvania, Indiana and West Virginia and then crossover the border to place a bet. You have to be within their state borders to place a bet, as well as deposit or withdraw money.

When sports betting does arrive in Ohio we expect it to be a rip-roaring success. With almost 12 million inhabitants and seven professional sports teams, the state offers the perfect storm.

This is undoubtedly why the state is biding its time when it comes to pushing through legislation. They must be aware that they will have no end of suitors once they open the state borders to sportsbooks.

If you look at a map of the states that have legalized sports betting, you’ll find small clusters across the country. The main reason for this is that many states cannot stand the idea of losing potential revenue to its neighbors. Ohio however, despite being surrounded by three of the largest sports betting markets in Pennsylvania, Indiana and West Virginia are not giving into the pressure.

Slowly but surely we expect that the two bills being considered by the senate will be pushed through by the end of 2021 and we will see the first Ohioan sportsbook launched before the end of the year.

There are two very different scenarios however, depending on which of the two bills are passed. One would place the state lottery as the controlling body . which would leave the state in a similar position as Oregon which has given its state lottery a monopoly over online sports betting. The other alternative would be a more open market where sportsbooks would be allowed to partner with any of the existing 11 casinos. If the latter bill were to be enacted, we can guarantee with some certainty that DraftKings and FanDuel would be two of the first sportsbooks to launch an Ohioan sportsbook app. 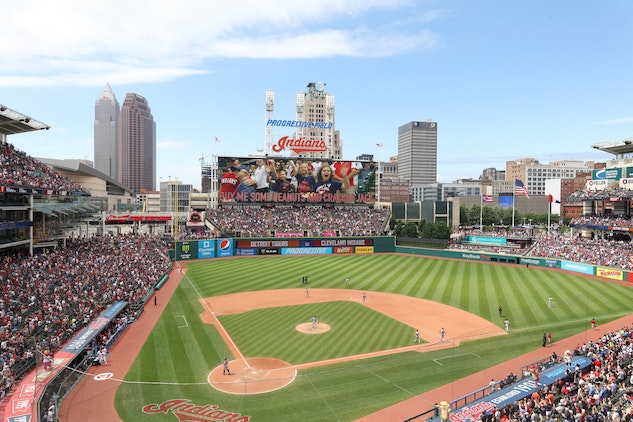 The Cleveland Indians in action

The Buckeye State has no shortage of pro sports teams in a variety of sports. This makes the state an incredibly attractive potential market for sportsbooks.

A common way for sportsbooks to raise their profile in a state is to sponsor or partner with an existing sports team. We expect this will be the case in Ohio should the state legalize sports betting.

Here is a full list of all the sports teams in Ohio.

There is little doubt that football is the most popular sports in Ohio. In fact, a recent study showed that Ohio watches the most football out of all of the US states. The Buckeye state comes sixth in total sports watched.